FREE UK DELIVERY ON ALL ORDERS

The Vicar and The Feminist

‘Why do men have g-spots in their arsehole if God hated gays!’

Growing up with my dad as a vicar, let alone spending my first decade living in the Bible belt of the USA, internalised some pretty weird ideas about sexuality, my own female body, and relationships in general.

It’s taken me years to be able to try and unpack, unlearn, and re-learn the ideas that child, teen and young adult Immy had been dished, usually unwillingly, onto her plate – even if it meant shouting things like ‘then why do men have g-spots in their arsehole if God hated gays!’ during Sunday dinner arguments, and other such thoughts.

Those around us who didn’t follow in this life had gone down ‘wrong paths’ and would lead unfulfilled and empty lives, or so I was told. Promiscuity was shameful with any sexual activity outside of marriage being classed as promiscuous and adulterous. As far as the church went, sex was for the wedding bed, and only ever between a cishet man and a cishet woman. In relationships, much like the rest of society, the man was the breadwinner, holding all of the power whilst the woman was passive, existing only to serve the needs of her incredibly strong and powerful husband. Swoon.

This was all I knew, with my sex education beginning years prior to hitting puberty, when my Dad handed over a copy of ‘The Body Book’. A technicolour illustrated wonder, which of course fascinated me with the drawings of the changing human anatomy. Perfectly shaped, white man and woman at 3 different stages of their lives. Next, penis in vagina. Sperm to egg. 9 months later. Baby. Done, and dusted. All you needed to know. Never a mention that women could even experience any sort of pleasure, let alone desire. The goal was procreation and that was that. 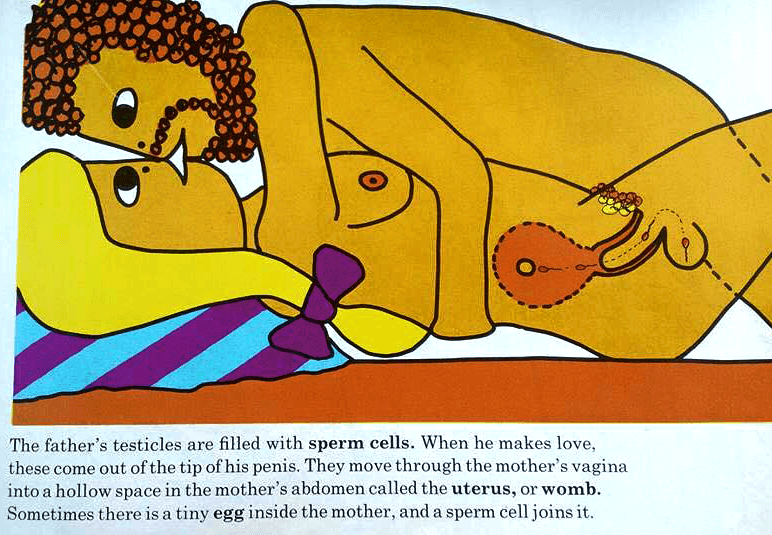 Pleasure was a mystery to me, a word that was never mentioned. I didn’t even realise that sex was something people enjoyed? It was an action. Like buying some bread, or going to work. Was I allowed to feel pleasure? Was I meant to feel shame from this? What happens when a woman experiences any sort of pleasure?

I was a leg-rubber. A thigh-squeezer. When I first started to squeeze my thighs together as I lay in my top bunk of my bed, this was when I began to feel pleasure. I was around the age of 8, and the feeling was natural. I felt no shame, I felt no sense of purity (or lack of). This developed to cuddly tiger humping, grinding up on bollards, and a personal favourite, discovering the wonders of water pressure. It wasn’t until around 10 years old, that I pieced together arousal and this pleasurable feeling. A quick glimpse of the cartoon penis on page 6 of The Body Book soon turned into flicking to the horniness of the last TV channels. With the gifting of a mobile phone a year or two later- this opened the world of reading erotica on my tiny Sony Ericsson screen (alas, the parental lock blocked videos, so my imagination was key) – but don’t get me wrong, this has made me the woman I am today.

The power of online resources led me onto a new path of curiousity and led me to question the outdated patriarchal hierarchy of monotheism (religions that focus on one deity; Christianity, Islam, Judaism). But having a father who’s life was dedicated to such ideas, my arguments appeared moot, and there was never an alternative. What he was doing was ruling in my favour and that was that. In year 7, I was pulled out of having the HPV/cervical cancer jab. Not being a fan of needles, I was actually relieved until I realised years later that my parents had decided that there would be no need to vaccinate because they spoke for me in saying the only sexual activity I would have would be with my husband, so any chance of a venereal disease being my problem surely wouldn’t exist.

When I was around 13, my older brother had just started dating. I remember the day that he came home with his head down and told my parents the bad news he’d just found out about the lovely girl he had met the weeks prior. She wasn’t a virgin. My brother was crushed, my parents consoled his disappointment. I too was consumed in his second-hand grief that he could no longer pursue this girl. A woman who did not save herself for marriage lost both respect and value.

I remember searching in my Bible and online to see IF there was a loophole to this. Could I still be valued, if by chance, I didn’t save myself for marriage. I somewhat knew that ultimately this would be my choice, but at what cost? Lose the respect from my family and those around me whose opinions I really valued as a teenage girl, just to do something I would ‘forever regret’, in the words of my mother?

How did it stand however, when my first sexual experience was non-consensual? Where was the loop-hole for that? For what I’d always known, sexual activity happening outside of marriage, let alone outside of even a ‘loving relationship’? Embarrassing. Shameful. How could a woman have such little respect for herself or her future husband? And this was the shame I felt, without even acknowledging the fact of abuse. Without the knowledge of understanding healthy sexual relationships, this left a very large unknown void in my life that was filled up with lessons I’d have no alternative other than to learn for myself.

Unpacking this whole idea of female sexuality and freedom without the confines of the church has taken many years, and a lot of learning the hard way. Accepting that I was attracted to women as well as men, also took a very long time for me to process and I battled with this considerably, especially when my family’s stance on homosexuality stayed very unprogressive. Learning what types of healthy relationships you can have, ones that sit in and outside of the binary, how a woman is allowed to decide who she shares herself with, how a woman is allowed to say no, and how a woman’s deserved respect is not equatable to her sexual history.

It has taken me my whole life to get over the shame and guilt of discovering a life for myself that went beyond my family’s beliefs and history, who’s Christian traditions spanned generations (both of my parent’s fathers were vicars too). Being the notorious black sheep really had its downfalls, with little to no guidance in my life about sex, drinking, drugs, or even, god forbid the F-word. Feminism. I’ve come to peace with myself now that I will never have an open relationship with my parents and that most of my life is a private matter. I have found I will probably never disclose my sexuality to them, or even talk in depth about anything deeply personal but I’ve also come to terms that I don’t need their approval to be happy and whole. I will love them as my parents, but I have my friends for friendship, and I have been able to choose my family-like support within the people who love me for who I am.

I’ve learned there isn’t a correct way to find the you that had to hide during your upbringing. It’s taken me 23 years, but I’m so glad I’ve found her, because now she’s my absolute soulmate, and she LOVES sex without shame. So should you.

What are you looking for?